What Is A Diastema?

If you ask people about the word diastema you might get different definitions from different people but the official dictionary definition is just a space between the teeth in a jaw.

Many mammals, including humans, have spaces between their teeth. Some herbivorous animals have natural gaps between their sharp incisors and rear molars to help them gnaw and chew food.

In a human, a diastema can be any gap between any of the teeth and it can apply to the upper or lower teeth, baby teeth, or permanent teeth. However, when dentists talk about a diastema we are usually talking about a significant visible gap between the front two teeth. which is technically known as a maxillary midline diastema.

Many people have a diastema and some people think this is cosmetically appealing.  You see movie stars or celebrities who have a small gap between their front teeth but they chose not to have it closed.

The term comes from the Greek word diastema that just means a space between. Interestingly the plural of this word is not diastemas it is actually diastemata so if you are talking about multiple spaces between different teeth you would say diastemata. I am going to use the word diastema because I am generally only going to be talking about a general condition that is the gap between the upper two front teeth.

What I am not talking about is the natural spacing that most people have between their teeth in their childhood days.

Primary teeth or baby teeth are typically supposed to have gaps between all of them. 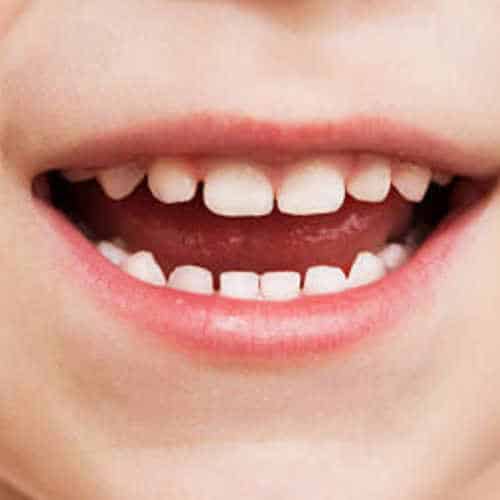 What typically happens is that the front two central incisors will come in at an angle (Fig 1.1). After that, the lateral incisors come in next to them at the same angle and it is not until the canine teeth erupt later on and push those four front teeth together that the gap starts to close. The ugly duckling stage is the period of time between the front four incisors coming in at an angle and the canine teeth erupting to push them into the correct position. 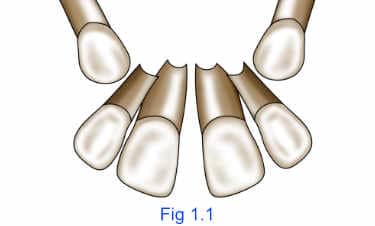 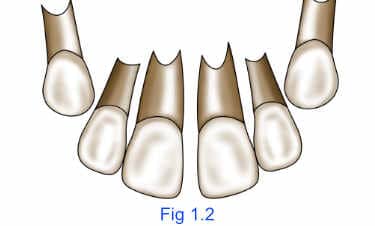 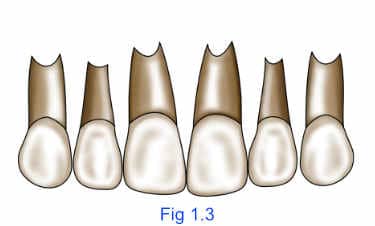 The causes of a diastema, the space between the front teeth, that persist after all the permanent teeth are many.

Why should you treat diastema? You don’t actually have to,  treatment is optional because generally, it is just a cosmetic problem so the treatment would be more for cosmetic reasons.

In some very severe cases in diastema very large gap, there could be a speech impediment that would need treatment to close the gap so that a child or even an adult could begin to form certain speech patterns.

Diastema closure treatments may require a combination of dental disciplines that include orthodontics, oral surgery, periodontics, and cosmetic dentistry.

Diagnosing the cause of a diastema will require an in-person visit with a dentist so they can conduct a thorough oral examination. The dental team will usually take a series of x-rays, high definition photos, and models of the teeth as part of the diagnosis and treatment plan.  The x rays are important to help us understand the angulation of the root of the front teeth to know whether or not orthodontic treatment will work. The patient may be referred to an orthodontist to discuss the best options to straighten the teeth and close that gap.

If the cause of the diastema is a frenulum tissue attachment, it is common for the orthodontist and the dentist to work together.   The orthodontist will close the gap but not remove the braces and wires until a frenectomy has been performed. If the frenulum is not removed the gap will likely reopen after the braces are removed.

If the diagnosis suggests a tooth size discrepancy and the teeth are too small, the dentist would not plan to move the teeth at all as that could affect the bite. In these cases, rather than using orthodontics, we might treat the diastema by enlarging the teeth with restorative dentistry. This could be achieved by using bonding techniques or by fitting veneers to change the shape and size of the teeth to make them visually correct.

If a diastema is caused by a tooth size discrepancy and is going to be corrected with restorative dentistry rather than orthodontics, patients may want to see a cosmetic dentist. A clinician who focuses on cosmetic dentistry would be able to create a very natural-looking restoration that would fill in the gap, giving a nice beautiful smile.

As far as bonding versus veneers, porcelain, veneers cover the entire physical surface of the tooth, they are made in a dental lab.   They are made to very specific conventions and a prescription that your dentist provides for the lab technician who makes them. Bonding is where we use a tooth-colored filling material that has an adhesive bond to fill In the gap. It is a more conservative procedure where we just add material to fill in the spaces. The final results achieved by bonding may not look quite as nice as veneers.  It stains if you smoke or use tobacco products or drink a lot of coffee the bonding may stain,  may chip or break,  that kind of thing.

If you have any type of treatment for diastema there is going to be some maintenance required in order to prevent the gap from reopening.  If you have an orthodontic treatment where you simply close the gap using braces you must wear your retainers.    Retainers are basically required for the rest of your life unless you want the teeth to go back to where they were.  Even if the muscle attachment was removed you still must wear your retainers according to your orthodontics’ instructions.

If you go the route of having bonding or veneers done to close the gap, most likely you will want to wear a protective night guard so that you don’t grind your teeth at night and chip or crack the veneer or bonding. Bruxism is a nighttime tooth grinding habit that can cause the diastema to reopen or even open wider. The worst thing would be to have a gap open wider because you are going to reach a point where you can’t continue cosmetically adding to the teeth without making them look very unnatural! Dentists always take that into account before considering the treatment options in cosmetic dentistry.

So that’s a lot to think about if you have a diastema you want to make sure that we understand the cause of it so that we have a successful diagnosis treat and make this last for a long time.